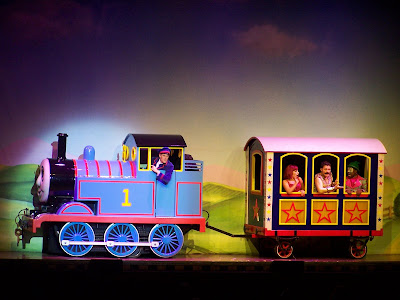 Last Friday we drove up to Sydney to see Thomas Live on stage. To say that Jack was excited was an understatement. All week we'd been doing the countdown (how many sleeps till Thomas?) and when Jack woke up on Friday he bellowed, "FRIDAY!!!" 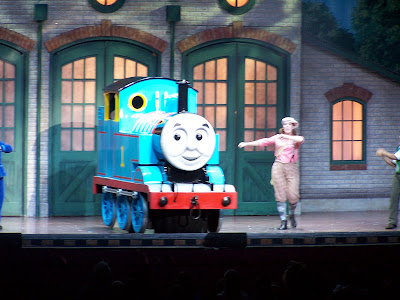 We made sure that we arrived in plenty of time at the Acer Arena, parking next door in the handily located parking station and joined the throng massing towards the entrance. 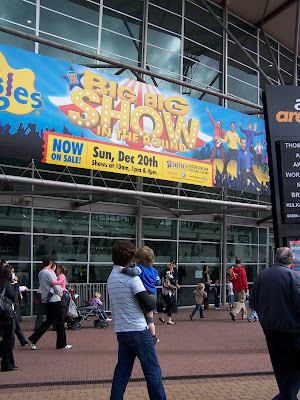 We paused to admire the poster for the upcoming Wiggles concert (on Mum's birthday - wouldn't that be fun?) and made our way inside. As S and I paused and goggled at the prices of the merch Mum purchased two programmes (one for Jack and one for Scarlett) and we found our seats. Then my brother and Scarlett appeared (who made a beeline for uncle S) and Jack and Scarlett inspected the ceiling (I have no idea wha was so fascinating, but there was lots of gesticulating and perusing) and had a catch up. 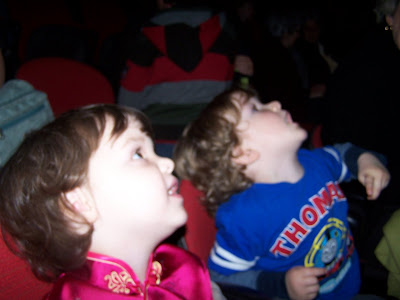 Nonno reappeared after a short absence with Thomas caps 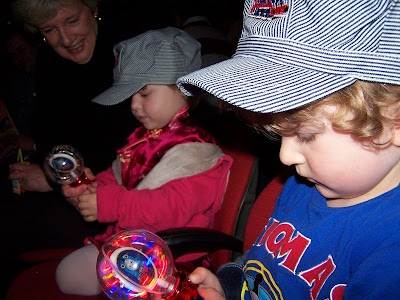 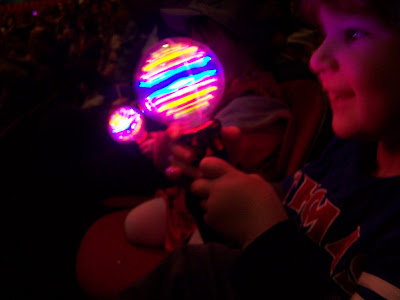 And the Show? Jack was delighted when the trains stared appearing, pointing and enthusiastically calling out their names (my son the trainspotter) but it did go for a looooooong time. And then it stopped for an interval (so Craig could buy churros) and then it stared again. At this point Jack started crying and saying, "no, no," and in between the songs you could hear the wailing of small, overstimulated children. 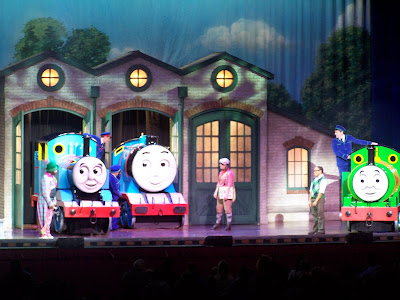 We were pleased when it finished and we could head back to the car park and get him home for a nap, except that when we got there we found puzzled parents wandering around holding small tired Thomas lovers. We were duly informed (by a sort of weird game of chinese whispers) that there was a bomb scare and we could not return to our cars. What is scarier a bombscare or an arena full of frazzled parents and their feral offspring?
We headed off in search of food, but with all those 'masters' getting ready to compete and other parents having the same idea we didn't have much luck. After Jack had a meltdown we decided to take a chance and try the car park again. We sailed on in, no police no security and reclaimed our car. Jack was asleep before we drove out the exit, no doubt dreaming of Thomas. 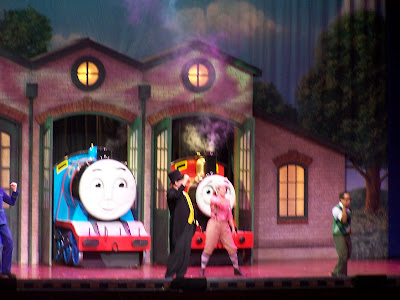 So often the anticipation is so much better than the actual event. What age group were they aiming such a long show at?

Hmmm...not two to three year olds (the thomas obsessed demographic) and certainly not the gen x parents or baby boomer grandparents. Jack seems to have forgotten the bad bits and his memories of the show are very fond indeed. Someone suggested it might end the obsession. Not a chance!