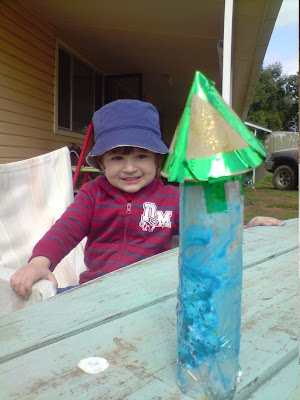 a rocket so big even the birds are scared

As well as doing lots of gardening, cooking and eating pumpkin scones, Jack and I made some rockets yesterday. We were inspired by Charlie from Charlie and Lola who makes a very impressive rocket only to have Lola break it seconds later. Ours was not as impressive as Charlie's but Jack was still very happy.
Which reminds me of a conversation Jack and I had a while ago.
Jack: I'm going to go in my rocket to the moon.
Me: Really? Who else is going?
J: You and Daddy and William (a friend)....
M: Who else? What about .....?
J: Oh no - he did a poo in his pants.
Harsh, but I guess a rocket is a very confined space.
Posted by jetlagmama@themanor at 03:15