Last week we went on a bit of a food adventure to Sydney (try as I might to get excited a roast beef and gravy roll at the wagga marketplace is just not cutting it). As Monday was S's birthday my parents offered to mind Jack so we could go on a hot date. I asked S where he would like to go and he said Red Lantern, which is a Vietnamese resturant in surry hills well known because of its good food, but also because it has produced two cookbooks and one of the owners/chefs did a DVD about eating and travelling through Vietnam. And it's where Callum and Adam and all those masterchef peoples partied on after the final episode.
I booked online, which is so easy for those with phone issues like myself, but our time was not available. I was offered 6pm or 9.30pm. As the parents of a 3 year old who regularly dine at 6 and are ready to hit the hay at 10pm it was not hard picking a time.
The resturant was smaller than I expected, the staff were fabulous (patiently answering many questions about goat, galangal and rice paddy herb) and the food was very good indeed. 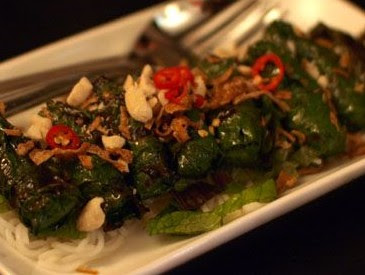 My entree of char grilled beef and lemongrass wrapped in betel leaves was smoky and delicious, but the best meal of the night was the goat curry. Apparently it's a speciality and it was tasty and meltingly tender. The crispy skinned chicken that I chose, while nice was just not in the same league. 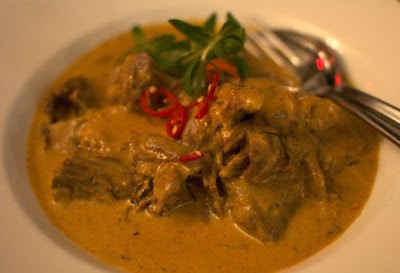 After all that and feeling absolutely full up to dolly's wax we still managed to share a desset platter. Even though I am not a fan of the 'hot banana' I made an exception for the tapioca pudding with bananas and the banana fritters. I could eat a plateful right now.
Posted by jetlagmama@themanor at 03:04