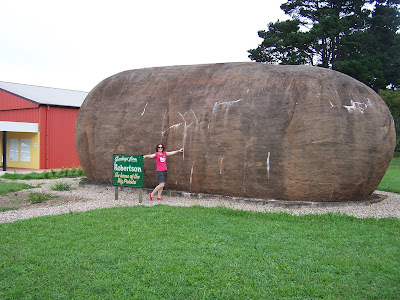 After my success touring the Big Banana, wearing some big clogs and driving very quickly past the big windmill and the Big Prawn I thought my happiness was complete. That is until I realised that we would be driving through Robertson last Thursday - home of the Big Potato (aka the Big Poo though I can't understand why). I made S promise that he would stop and take a photo of the spud and me. He disputed the existence of the Big P (as he'd driven through Robertson the year before) but I told him that he probably just drove past it because he was unaware of its existence. Anyway there it was so we screeched to a halt, I ran over to the sign, posed and we roared off again. Once you've got the pic there's no need to dilly dally. No potato themed souvenirs or snacks( chocolate covered frozen potato anyone?).
As far as the standard of Big Things go it's right up there don't you think?
Posted by jetlagmama@themanor at 18:54

Wow. That is spectacular, I can't believ I don't even know where Robertson is. Love the shorts ;)

Somewhere between Mossvale and 'the gong'. OMG shorts on a woman of my advanced years - call the fashion police.