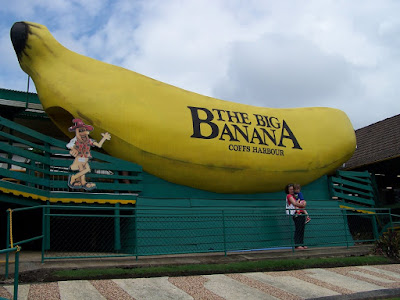 Okay, maybe time for a teeny weeny blog. For all the time that S and I have been together (and even before then) I always wanted to stop to look at the Big Banana and S always told me we would on 'the way back'. You see his parent's used to live in Qld and so we'd travel up from Sydney in the holidays. The only flaw in the plan of seeing it on the way back is that there wasn't a turning lane and we always raced on past. I swear the car used to accelerate as we got closer.
And so my desire to go just got more and more intense, particularly coupled with my obsession with kitschy big things. I love them all and the cheesier the better. The Big Banana became my holy grail (having already seen the Big pineapple, earthworm, crayfish, merino and cow). So when S told me we were going to stay in Urunga on the way to QLD I knew I would have to go to the Big B. And we did. And it was spectacularly crappy. The inside of the banana smelt well funny, but I think that was because a man walked through before us and farted. The tours didn't seem to be running and the shop was a compacter's nightmare. The staff unfriendly, though the choc coated banana was alarmingly freudian, but rather tasty. As S complained about the sheer crapulence of the place I told him if he'd taken me years ago I could've got it out of my system.
And of course where do you after such a successful touristy outing? Why the Clog Barn of course. Jack and I wanted to go there for the model trains (photos to follow) and S just wanted to run screaming from the place. Not sure why, maybe he doesn't like clogs. 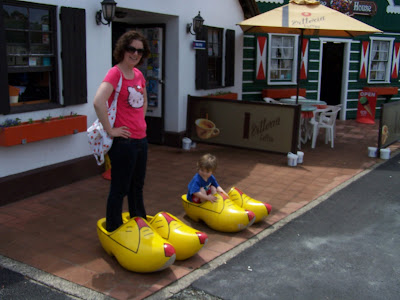 I love your Hello Kitty shirt! It goes especially well with clogs. I'm glad you're having a fabulous time ;)

LOL my husband's brother used to drive the train there! I hope you and your family and friends have a great Christmas full of fun and frivolity (and no bad smelling bananas!) :)

How famous are you today?! You and your Bum Hummers! See you at work tomorrow, hope you had a lovely time on the Central Coast.