The next morning I was getting my haircut and in the nostalgic spirit of the weekend (no, I was not getting a blue rinse or a chignon) I decided to visit my Mum's hairdresser. Why should that be nostalgic? He's been cutting my Mum's hair since I was in high school and he actually used to cut mine. Yes, he was partially to blame for those big boofy hairdos but you know it was the eighties and I was a willing participant. It's only now that I look at the photos and go Ack! See below. 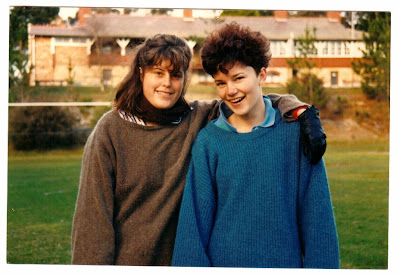 Mum and Dad chauffeured me into to Surry Hills where I had a thoroughly relaxing time chatting to Peter about vampires, posh beckham, gossip girls, salt and pepper tofu and about how completely stupid women's shoes have become. In no time I was transformed with a sleek new do (not a *sniff* 'country' cut as my mother would say) and ready to go for a walk around surry hills (my destination the pocket sized source of delectable baked goods the bourke street bakery).
I asked Peter (or Gareth if he has gone ahead with his threatened name change) if I could take a pic of him for my blog. He demurred, saying"no, no, you don't want to take a photo of me...oh alright" and suddenly there he was oh so casually leaning against the door frame. 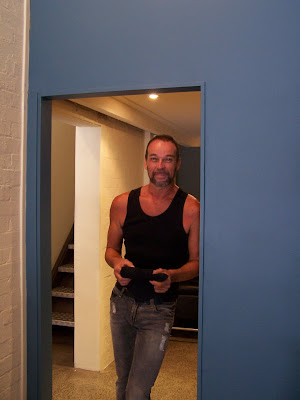 I took a photo and once he approved it I headed out into the sunshine in search of sourdough and possibly a gumby or two. (I found the bakery but not the gumbys, only some very fetching moomintrolls and some rather ferocious dinosaurs).
Posted by jetlagmama@themanor at 19:35

Great 80s shot Kristy. Fabulous hair. I'm going to Three Chefs tomorrow night so am going to have to take lots of photos when others might not - blogging!

No Kristy, Peter has been cutting my hair since you were in primary
school.

Hehe I love 80s hair shots too. They always make me cringe and giggle when I see photos of my back way back when. Actually more cringe really :) You seem to have escaped the giant spiral perm which is good!