I've been kind of putting off writing about my reunion. I'm not sure why - it certainly wasn't the disastrous evening it could have been. It was only on my return when I felt a 'little under the weather' which S thought was due to overindulgence but was actually a gangrenous appendix, that things went pear shaped. 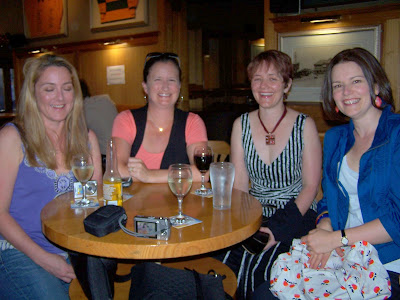 Alex, Nicole, Snoz, me at the buena
The night itself was surprisingly okay. I had arranged to meet up beforehand in a pub called the buena, the site of many a drinking session in my uni days. When I arrived, some of the girls I went to school with were there, Alex, who looked surprised when I mentioned her mum's amazing cooking, Nicole who did a plaster cast of my face as part of her year 12 major work 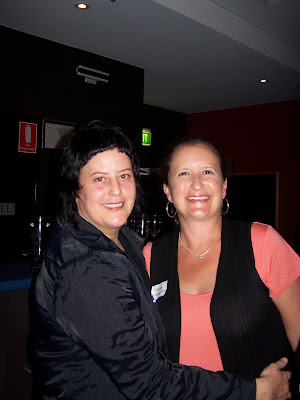 Claire and Nicole (my partners in crime from maths)

and Jacqui who I remember wore a hired costume (before anyone did that) to the book week parade in year 7 and won a prize. She was a princess - maybe even Cinderella whereas I was Raggedy Ann. That's so primary school. 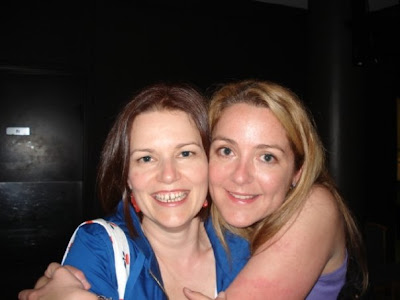 Alex and me
They were instantly recognisable in spite of some being blonde and some having made friends with the hair straightener (thanks Nicole). Snoz turned up (her real name is Elizabeth) and Claire did too. I have known Claire since primary school and she has really been the only person that I have kept in touch with. Actually she kept in touch with me - I was rubbish at keeping in touch. I'm not one of those people who has regular get togethers with school friends and the reunion and the flurry of emails beforehand have been a revelation. There are still some people that I think Who are you?Do I know you?
So then some of the guys I went to school (and Uni) with turned up. Reminder to self: not cool to greet someone by saying, "you didn't reply to my message on facebook" It makes you sound like a crazy lady. Some of them have obviously consorted with hobbits or something because their complexions could only be described as dewy in spite of many years exposing their skin to sun and surf. 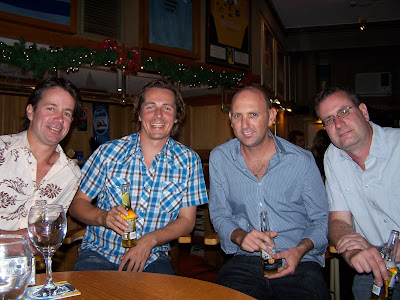 Eventually we reluctantly made the move to the RSL and to the harbourview bar. It was weird. I had lots of OMG that's (insert name here) moments (hopefully inside my head) as I moved towards the bar. Some people were immediately recognisable, others, even with the aid of a name tag I'm still wondering who they were. Ours was a pretty big year (about 180 peeps) so it was possible to go our whole time at school without talking to someone. Dave was someone that I can't recall ever really chatting to at school. Not sure why as he sat in front of me in English. Weirdly in the months preceding it I had some bizarre dreams about the reunion including one where it was being held in an above ground swimming pool and Dave was there with a boogie board talking about wetsuits. Weird but not as alarming as the dream where the reunion was being held in the ballroom in my house (fortunate) but I was dressed in Pjs (unfortunate).
For awhile a group of us got boxed in near the bar which made escape (if required) difficult. I was standing next to Sean (who I went out with at Uni and who introduced me to S) and people kept walking up and saying to Sean, "Were you this tall at school?" to which he would reply, "yes" and sigh and then they would turn to me and say, 'Where's your frizzy hair?" to which I would say, "curly - it was curly" and grit my teeth. 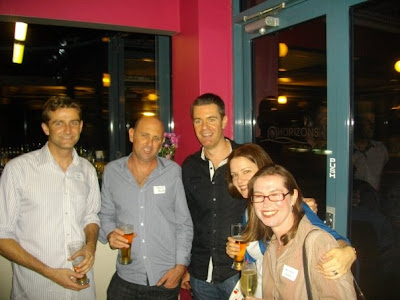 Justin, Dave, Sean, me and Michelle boxed in at the bar 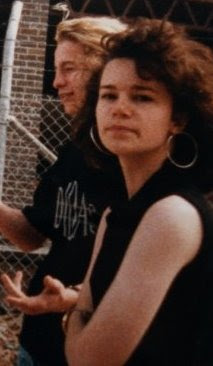 Eventually we made a bid for freedom to a spot with more possible escape routes (though that didn't always work). I had a lot of short conversations of the 'How are you?' variety that quickly tapered away to nothing. People would smile and then their eyes would start searching the room for someone else to chat to. As a result when I thought about those people later I knew very little about them. Other people shared too much. 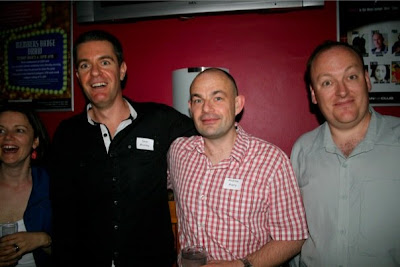 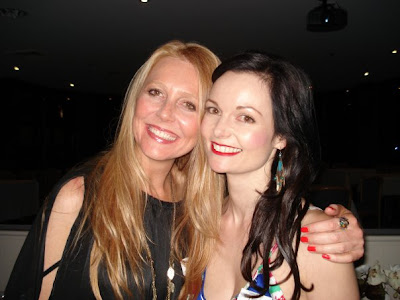 
It was strange to note that while most of the girls looked amazing (though as someone's mother would say some didn't make the most of themselves that night - at least put on a dab of lippy ladies) some of the guys had obviously peaked early. Sometimes it felt like I was talking to Homer Simpson, except without Marge, or Bart or Lisa or Maggie and not quite so yellow or successful. Some people had changed (ie they were nice) while others still appeared to be well, wankers. And some had become let's say a touch dull. 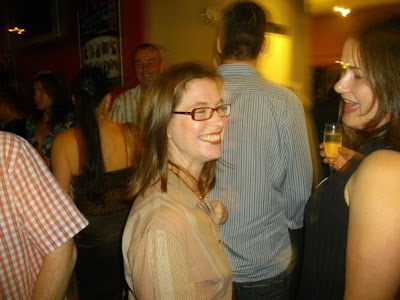 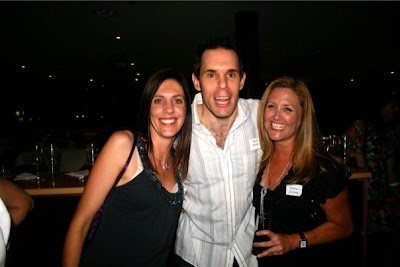 Samantha, David & Andrea (who I may or may not have
stabbed in the knee with a pencil in 3rd grade)

It was disappointing that my friend (and high school Biology buddy) Nick wasn't able to make it as there were some nostalgic biology class moments. Our teacher was there, which was nice and we got this pic together. She was the teacher that really got me into science and it was in her classes that I started to do well. 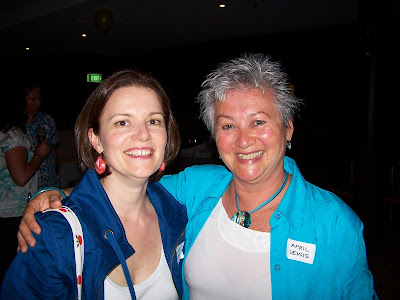 Me and April
Maybe I was too scared to fail, because she had a bit of a reputation for being scary (she wasn't really). When I went to Uni I actually started out doing a science degree but that's a whole other story. 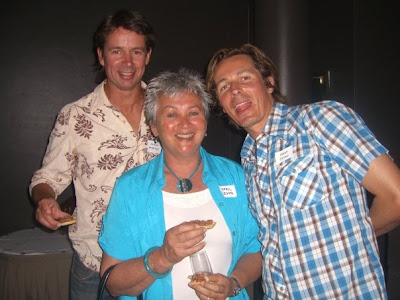 And I spoke to my arch nemesis (we used to vie for first place in Biology, yes I know ' loser'). Actually I also had issues with her because I was the confidant of a guy that had the most ginormous crush on her (lots of guys did) and he'd pull me aside at parties just to talk about her for hours and hours and hours. Actually i think I reminded both of them about that on the night. Disappointingly another classmate Nina Nematode (named during the study of invertebrates) couldn't be there. I still managed to reminisce with George about a rather memorable talk he did on Siamese twins. 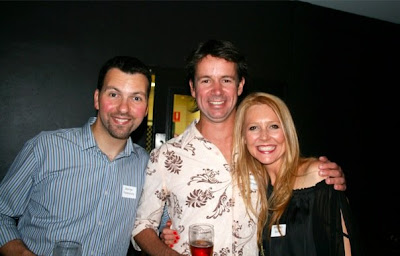 Disturbing doesn't even to begin to describe it. He seemed a little dismayed that I remembered. I think he'd blocked it out until I mentioned it and then it came flooding back. 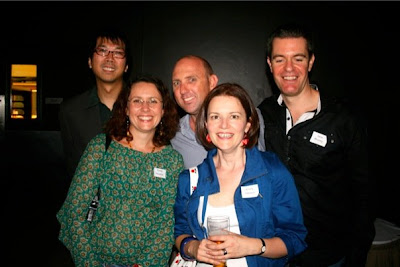 Howie, Penny, Dave, me, Sean
I chatted with people I wanted to chat with and some I didn't, heard some very funny stories about a honeymoon from hell (would you take your new spouse to a nudist colony followed by diving with great white sharks?). I was in turns amused, scared, relieved and a little bored. 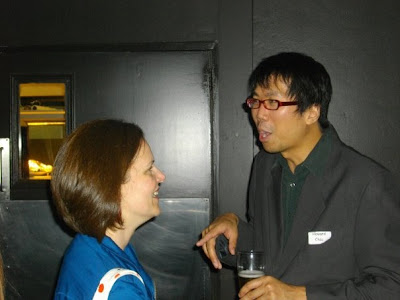 Me and Howie
And then it was about 1 am and we were being kicked out. Funny as I thought I'd be going home around ten. Some people had plans to party on at the 'metrohole' but being the mature person I am (old) and meeting my friend Soph for breakfast in six and a half hours I trotted back home to my parents place and to bed. Funnily enough I didn't get swept off my feet by an old school flame as S feared. I think I got spaded by one of the bad boys of our year but I was too busy laughing to know for sure. 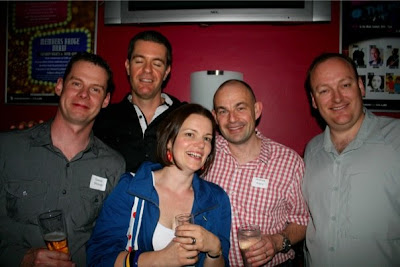 Dan, Sean (trying to visualise a happy place far away from
men's room conversations about receding hairlines), Avery and Peter.
oh and me.
Posted by jetlagmama@themanor at 19:51

Wow. On the whole, they all look so much older than you! Perhaps I am living in a fantasy world but I think of both of us as being much younger than the old people, mostly men, in these photos. I think I need a reality check :( What will my reunion be like? Will people put photos of me on their blog and ask if they look as old as I do?

OMG Amy. We are the same age but look so much younger because of the cake (or in your case because of your beautiful skin and photogenic physog). They will say "what's she doing here? she's come ten years too early." ;-)

Love it! You have such a way with words, you've captured the evening beautifully! Mixed bag for me too, but interesting nonetheless. Bring on the next one (in about 20 years... soon enough!)

Odette! not going to the picnic? Isn't that Tomorrow?

You are so right about the cake! Thanks :)
PS My word verification word is 'bratism"!