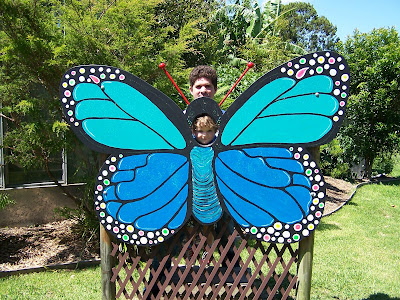 After my rather interesting choices (the clog barn and the big banana) I was surprised that S trusted me to choose any other sights to see, but the butterfly house had come highly recommended by my friend Fairy (whose kids absolutely loved it). After missing the turn off and travelling up and down the Pacific Highway a couple of times I was hoping it would deliver. I envisaged room after room of beautiful winged creatures. Once we recovered from the price ($14 each and I could see S thinking this better be good) we entered the room, prepared to be amazed. the butterflies were beautiful but didn't have quite the calming effect on Jack that I wished for. 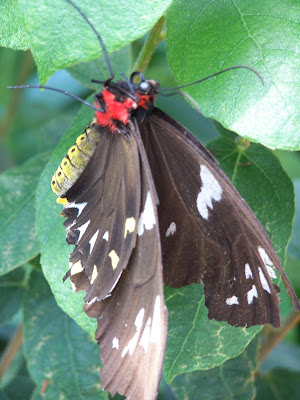 I believe he suggested leaving immediately. We walked around and around, but he was not completely excited.I noticed a sign asking people to be careful where they stepped as butterflies oftenlanded on the path and took care but obviously not everyone did. Right in front of the girl doing talks on butterflies there was a butterfly shaped splat with some crumpled wings. I kept on expecting her to say something or to at least remove the little corpse but she never did. 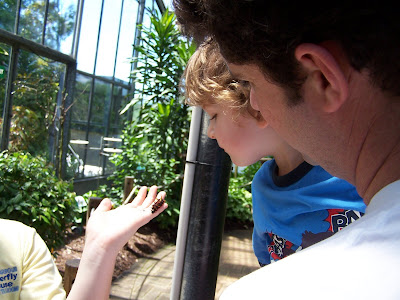 She was too busy trying to get Jack to pat a caterpillar (no way that was going to happen - he thought it was too spiky) and then I quite evilly mentioned Eric Carle. You see I know that the people at the Butterfly House get quite incensed about his book the Very Hungry Caterpillar (though they still manage to sell it in their shop). This is because it says that a butterfly has a cocoon not a pupa. And she did get quite cranky too, telling me how incorrect it was. Relax people it's a picture book (albeit a much loved and wonderful children's classic) not a textbook. I'm pretty sure caterpillars don't eat five oranges or ice cream or salami either.
After our fifth circuit in as many minutes we set off to explore the rest of the 'complex'. Jack wanted to touch things in the gift shop and then we found some puzzles that kept S and I amused for a while 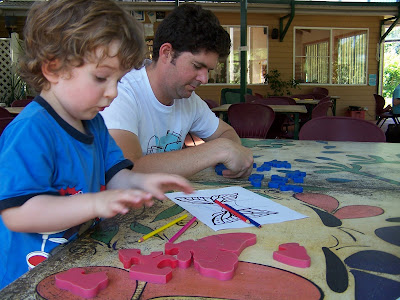 and a great photo op and that was it. We decided that I should stop suggesting sightseeing spots and go make some sandcastles instead.