When you are a parent you talk about wees, poo and farts a lot. It's only when people around you without kids start looking alarmed that you realise maybe it's not suitable conversation for polite company.
People with little or no interest in the scatological avert you eyes now.
And so we come to toilet training time. All the books reassuringly advise to wait until your child is ready (and not when people of my parent's generation say that they should for after all we were in cloth nappies which are not quite so absorbent or dare I say comfy). I'd say that's good advice unless your child is going to a preschool that says no to nappies. Jack will be (hopefully) starting preschool in April (our local preschool is harder to get into than that special room at the Ivy) after he turns three so we have some time. We thought maybe we should try now because he certainly seems interested when we go (sigh) and he loves books like Who's in the loo, The Little mole and Everybody Poops (though I change poops to poo and diaper to nappy). And it's warm so he could run around with no pants on if he wanted to. For some reason he doesn't. 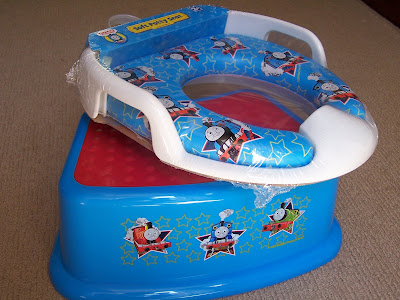 When S produced this seat and step (because Jack's only interest in the potty is wearing it as a hat) Jack was excited until we placed it on the toilet when he ran screaming down the hall, "I don't want to use the toilet anymore!" Anymore?
Even the allure of wearing Bob the builder, Thomas or Mr Men undies is not enough. If only he could show the same enthusiasm for becoming toilet trained as he does for farting. The other day he farted then proudly announced,"gee, I'm getting really good at farting!"
Posted by jetlagmama@themanor at 18:33

It is a very important skill to have.