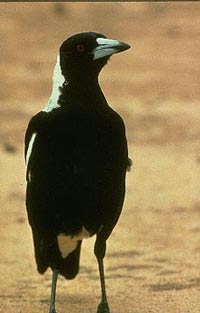 Up till now I've had a pretty good relationship with Magpies. They have a bad reputation and I know some people are terrified of them but I never had a reason to be. Garn was a magpie lover. She'd stand at the back door and warble and they'd come swooping in to get some scraps.
I had magpies on my wedding invitations. The reason was twofold. The wedding was held at a local restaurant called Magpies Nest and magpies mate for life. I found out later that they do until the male gets skittled by a car then another male will turn up within 48 hours.
Last year a pair moved in here and over the summer I put out water for them and admonished Jack and the dog for chasing them. And then they started swooping us. That's gratitude. I know they swoop because they are nesting and want to protect the nest but it's very unnerving having one flap over your head.
And at first it was just a part of the front yard that was a no go zone. Then it was the whole front yard and then the back yard too.
While they didn't actually connect with my head, I found it annoying. I contemplated the ice cream container hat with eyes. S obligingly finished off the ice cream but the tubs were the wrong shape to fit on my head. I tried making a magpie scaring head band. Jack actually laughed when he saw it. So did the magpie. 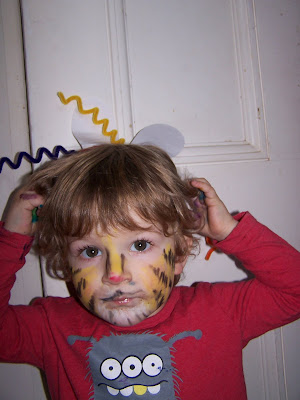 I wore a huge jester style hat with jingly bells but no luck. My lowest point was when the magpie swooped and I ducked down Tippi Hedren style, behind my 18 month old niece and Diane. Certainly not my finest hour.
Then I thought about Pamela Allen's book Waddle Giggle Gargle about a magpie that swoops Johnathon and his grandparents. They have to walk past the tree so they decide to make magpie scarers to keep the Magpie away. So the next time the magpie approached I clapped my hands above my head. He flew back up to the tree. He still kept a close eye on me and I swear he was sharpening his beak, but at least he wasn't hovering over my head.
Posted by jetlagmama@themanor at 20:37

I started getting swooped on my way to and from work on the bike. At first they just flapped but then they became very bold and nipped my ear. I go a different way now as I do not care to arrive at work all bloody.

Much harder to clap your hand whilst riding a bike! Apparently the season only lasts for another month.