Star Wars fans are such wags. The reason that I say this is that they celebrate Star Wars Day on May the 4th (as in May the 4th be with you). There seems to be a lot of Star Wars in my life at the moment due to Jack's current obsession and memories of mine from childhood. I loved that first movie (I refuse to call it the fourth one) and re-enacted scenes over and over again at school. Santa brought me a Princess Leia doll, who was never quite the same after I undid her buns and my brother had a Blaster. Jack thought it was sad that I never got a Leia costume (coming from a boy who has an Anakin, Luke, Obi-Wan and a Darth Vader costume) and asked Santa to bring me one last christmas. Must've had other things on his mind.
For Jack's birthday I wore a Leia wig and a white skivvy, but wasn't entirely happy with the look. The wig seemed too small (could it have been made for a child?).
As May approached I checked my work roster and noticed I would be working on May the 3rd. And working with a friend who has a Han Solo costume. Should we celebrate Star Wars day in the library and one day early? We decided that we would, though our co-workers did not seem keen on also dressing up.
The result was fun. Wearing even just Leia's buns (I cut them off the wig and pinned them onto my head) certainly caught people's attention as I bought dog biscuits and groceries before work. I got mostly positive reactions, some funny sidelong glances where people pretend not to stare and one customer who thought I was a Nun. A dad came into the library with his little boy (dressed as Spiderman) and he was really excited, so excited he got another member of the public to take a photo. Minor celebrities we were. 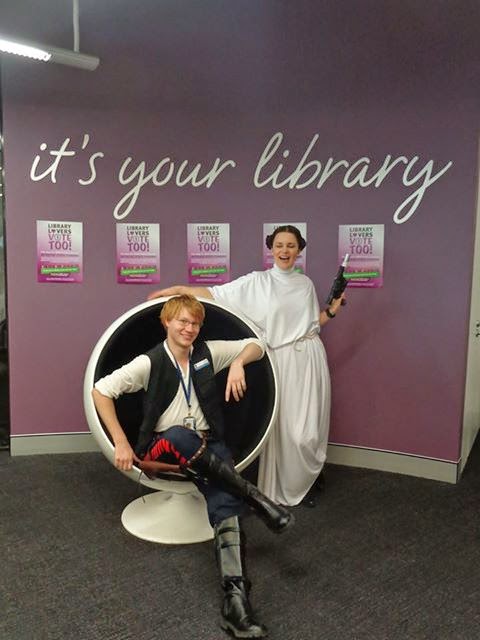