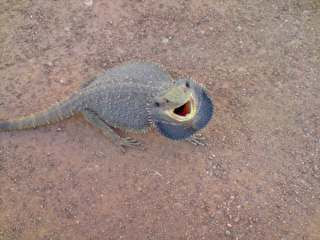 And we're back....on Tuesday I arrived home to find my way barred by a smallish but very fierce lizard. As I didn't want to squish it with the car I tried to persuade it to move. Even though, quite obviously I was the bigger party and it should have given way to me, it puffed itself up and ran at me. As I was wearing a dress (for Cup day) I took some very hasty backward steps. I didn't fancy those sharp little claws running up my leg.
Yesterday It appeared to have moved in. Not to the driveway, thankfully but not far from there. It had dug a hole and was puffing and carrying on. Jack was not impressed, but the dog was even less so. He varied between treating it with complete disdain (walking over the top of it) to chasing it. Eventually it stalked off in disgust and Lucky Dog, a dog on a mission, covered the hole so he would not be back.
Posted by jetlagmama@themanor at 18:51

Wow! You live in the REAL country :)